The bike trail has a nice entrance and map.

Today I tried a second location that was supposed to have some nice mountain bike trails. I drove south to Canyon, the town just below Amarillo, where West Texas A&M University is located. Just north of their football stadium is a fantastic set of bike paths.

I just started riding on the “fence” pathway around the perimeter. It started with a meadow and then went downhill into a grove of sunflowers much taller than me. I was peddling through the narrow path between sunflowers when suddenly I went straight into this HUGE spider web. As I entered the spider web, I saw this large spider (probably 1.5 to 2 inches in diameter) crawling around. Instantly, I had spider web in my face, along both arms all over my handle bars and covering my thighs. I looked down and saw the spider dangling from my handle bars, right next to my left knee. I stopped my bike and jumped off and started trying to get the spider off my bike. I was able to pull over a sunflower branch and sort of get him off the bike and to the edge of the bike path. As I was doing this, suddenly a woman riding her bike came up behind me. We laughed as she saw me covered in spider web. It took a few minutes to get all the spider web cleaned off me. She rode into the remaining spider web of the path edges and was trying to get it off her arms too. She lived nearby and rode over to the bike path. She told me about different areas and what trails I might like the most. I told her since she knew the trail, she could go first and I would follow her lead. She was a much better biker than me and soon left me in the dust. However, on two occasions, I heard her cry out and as I caught up to her, she was stopped trying to get spider web off her arms and face. I guess no one has ridden these trails for a couple of days to have so many spider webs between the sunflowers. 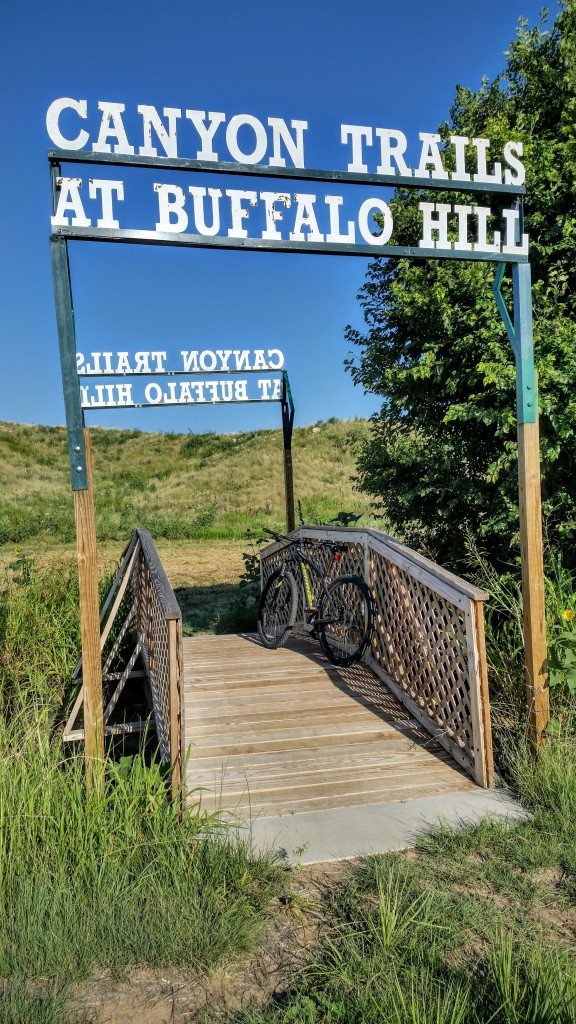 With most bike trails, you have to splash through water. Instead, Canyon built a nice bridge to ride over.

I had fun ridding through the meadows. While peddling through the grass areas, hundreds of grasshoppers would jump up in the air on both sides of the bike. It was like forming a wave of grasshoppers as I peddled. The lady was waiting for me at the top of a ridge and showed me a couple paths I might like. I finished the loop and decided to go around everything again. This time there were not really any spider webs as we had cleaned them all out the first time around.

My bike has 24 gears and I needed to gear down to the lowest gear to get up several hills. The first time around I had to push my bike up that last 5 feet or so in several places. The second time around, I was ready for the hills. I geared down to my lowest gear and was able to power up the hills! I then had to stop at the top to catch my breath.

This turtle was just sitting next to the trail.

Going through another meadow, I saw a turtle just sitting next to the trail. I stopped to take his picture and he never moved at all.

There was a 5 foot snake right here. However, by the time I got my phone out and swiped the screen for the camera, the snake had slithered away.

I headed back up the hill and around the perimeter fence path, when suddenly I saw a brown snake laying right in the middle of the trail. He was about 5 feet long and all stretched out. I had just been on this very trail about 20 minutes ago on the initial loop and now there was a huge snake right in the path. I hate snakes. I stopped my bike as fast as I could. I took off my backpack, got out my phone, and swiped the screen so I could take his picture. However, by the time I did all those things, this sneaky, slippery, serpent had slithered off the trail. I went ahead and took a picture of where he had just been. I took another loop across only this top meadow to see if he would reappear for a photo, but he was nowhere to be seen. I just peddled quickly through the area as I scanned back and forth looking carefully for the snake. Seeing a snake right in front of you will definitely get your heart pumping fast! As I rode back to the Jeep I saw a rabbit running along. I wonder how long until a snake finds him? So today was unique with seeing a spider, grasshoppers, snake and rabbit. Ridding my mountain bike is so much fun!