We are having so much fun! Our week pass to Zion National Park expired yesterday, so today we decided to let our Jeep enjoy what a Jeep is made to do! We asked for some recommendations for 4-wheel drive roads and had fun driving all over enjoying the Jeep. It was a blast! Southern Utah is beautiful and it was wonderful to drive around in the middle of nowhere enjoying the sites. Charlene put on a classical channel on Sirius radio and we had a wonderful time. Several times the roads were crisscrossed by mountain bike paths and bike riders were going everywhere. We also found several RVs on a couple of the smooth back-roads enjoying some boon docking locations. This is a very nice area to visit. We must come back and spend more time here.

After the 4-wheel driving, we headed back to the coach to watch the Final Four basketball games. We love March Madness (even though it is now April). We are rooting for the underdogs! 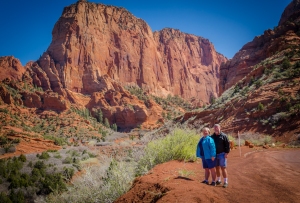 Today we drove back to Interstate 15 and north to Kolob Canyons. This is a second section of Zion National Park that is only 19 miles from Cedar City, Utah. Neither of us had been to this section of Zion. It is noted for its high red-orange cliffs. It is not as large as the main section of Zion, but the red rocks are especially beautiful. There were significantly fewer people here, so it was very peaceful and majestic.

We had a picnic lunch in the Jeep while we admired the setting. We drove the scenic drive and kept pulling into the pull-offs to enjoy the light changing on the cliffs. After we finished the scenic drive, we drove up to Cedar City. We went into the Ace Hardware to buy some zip-ties. Charlene noted on their sign outside that not only did they have hardware, but they also sold sporting goods. We thought it was especially unique that they sold handguns at the Ace Hardware and that they had a gun of the week special advertised on their sign. Unique.

Another beautiful day in Zion, another beautiful view of red-orange mountains, green trees, blue skies, and the flowing Virgin River. Today we went on an easy hike to the Emerald Pools. Very spectacular setting with amazing views 360 degrees around us.

We went under two waterfalls and had the water splash as we ran underneath.

Zion is such an amazing place to visit! The only real negative is there are so many people here for spring break that all the shuttles are cram packed and there are long lines waiting for the shuttles at each stop. The weather has been very pleasant. 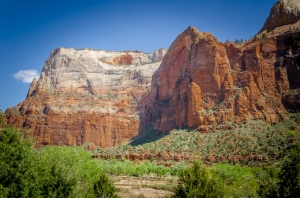 Ed went with Kathryn and her family on a strenuous hike to the very top of Angels Landing. It has been 40 years since he has been on that hike. The last time, they stopped before the very top because of strong gusty winds and the narrow trail. Check this item off the bucket list! 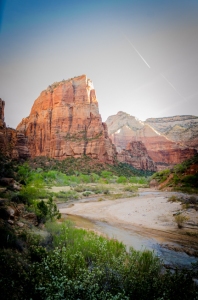 This is Angels Landing – the goal of this hike.

It was beautiful too see so many different rock formations along the trail. 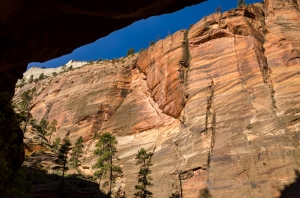 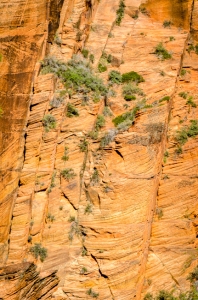 Walter’s wiggles is a series of switchbacks built into the cliff.

Although most of the trail was steep, the last half mile was treacherous as sections were only 2 feet wide with cliff drop offs on both sides. Six people have died since 2004 from falling off the edge of the cliff. 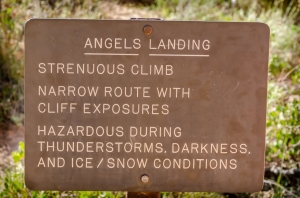 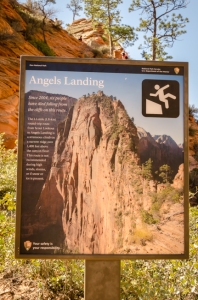 The narrow sections were a bit scary. We were glad it was not windy when we were hiking! 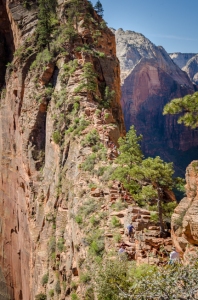 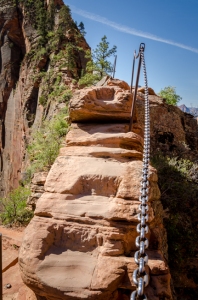 The view was beautiful at the end of the trail! It was well worth the effort! 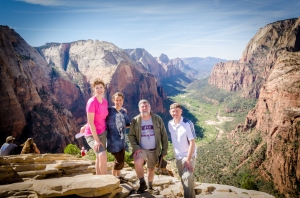 View from the tip of Angels Landing in Zion National Park

We had a great time with cousin Kathryn and her family today. We went on an easy hike called The Riverside Walk near the Temple of Sinawava. It was a beautiful Spring day with plenty of sunshine and leaves forming on many trees.

We loved watching the Virgin River flow through the canyon.

Once we got to the end of the trail, Charlene could not help herself; she had to go into the water. Kathryn joined her too.

Kathryn’s daughters, Elle and Katie, and their friend Lisette enjoyed the water too!

Here is our Drive to Zion