I love my RV spot because there is so much room around me! It is very quiet and nice and cool.

I have enjoyed meeting my neighbors. In our six RV spots, there are only 3 RVs (including me). In the other two spots are two women (Jackie and Nancy) far more experienced than me being fulltime RVers and traveling all over the US. In our conversations, every town or city I have named, they have already visited there. Often multiple times. One drives a motorhome towing a small car and the other drives a truck and pulls a 5th wheel trailer. Sometimes they travel in tandem seeing different places together and other times they split up and meet again some months in the future. We love our current RV park as it is very quiet in this small town and we have all kinds of room around us.

Friendly neighbor that has provided very helpful, practical advice when traveling in an RV.

Jackie and Nancy have given me great advice. When I told them I was heading east, they suggested I take highway 12 across Washington so that I would not have to go through all the traffic in Seattle. When I told them there was a tunnel on highway 12 that I was not sure I would fit through, they whipped out their trucker’s guide and showed me that highway 12 is used by large trucks, so that there would be no problem with me fitting in the tunnel. They strongly recommended that I buy one of those truckers’ atlases the next time I go to a truck stop. I strongly agree. They also recommended I try to join the Moose organization as a number of states have Moose Lodges with RV hookups. That is good information to know. 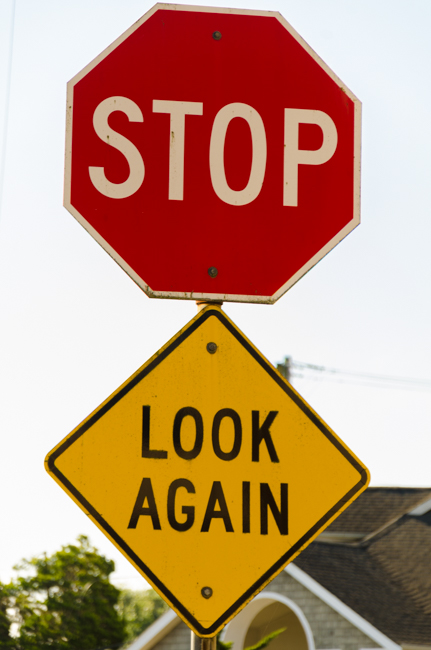 This sign is a good reminder. Not only for this intersection, but it is good advice for RVing. Stop and look again. Do not just zoom by, but stop and look around you. There is much to see!

They had recently been in Yakima (the general direction where I am headed) and they said it was well over 1000 and that they wanted to come to the Olympic Peninsula to cool off. I hope it is much cooler when I go through Yakima! They also really like Spokane, where I will be headed after I drive through the Palouse area of Washington. They described how it was only about 30 miles from Coeur d’Alene. Another RVer I met in Enumclaw told me about a tunnel east of Coeur d’Alene that is famous for riding bicycles through and then taking a shuttle back to the starting area. I am really looking forward to seeing that! Last night I asked them about traveling through Montana and Wyoming. They got big smiles and suddenly started telling me all about the beauty of Glacier National Park. They told me where to visit, good places to park the motorhome, and a road to avoid when driving the RV. When they talked about Wyoming, they loved describing how awesome it was to see Devils Tower National Monument. I look forward to seeing that too! As they were describing places they visited, Jackie grabbed her laptop and started searching her journal. She journals everyday describing her thoughts and travels. She found her section the last time they went through Montana and started reading off some of the places they visited and a funny story about sleeping in a truck stop in their RVs. When they discussed Idaho, they told me it was much better to buy alcohol in Idaho instead of Washington. Apparently, the taxes on alcohol are much lower in Idaho compared to Washington. That also led to a discussion about boxed wine. I was taught about the “poor quality” boxed wine and the better quality boxes wine. They told me where to buy the better quality boxed wines. They also liked boxed wines for RVing because they were not as heavy as multiple bottles of wine and they could not break like glass bottles could. Lastly, Nancy showed me that when she was all finished with a boxed wine, she rinsed out the bag, and would blow it up with air to use as a packing pillow to keep glasses and dishes from breaking. Very practical information indeed. Nancy went to the laundromat yesterday and said that Hoquiam had a high quality laundromat that was in her top 5 across the entire United States. Good to know. I do not doubt her since she has traveled to so many places and used laundromats everywhere.

I discovered this distillery in Aberdeen, Washington.

However, I surprised Jackie and Nancy when I told them I read that there was a distillery in Aberdeen, Washington. They got excited and then their eyes sparkled as they told me about going on a tour of the Jack Daniels distillery in Tennessee. They laughed because they said the county where the Jack Daniels distillery was located was a dry county so you could not buy liquor in the very county where it is made. Odd. Today Jackie and Nancy brought me a sack of all kinds of brochures about places in eastern Washington. It will take me a while to sort through everything they gave me, but I certainly appreciate the opportunity to learn about places I will visit very soon.

The beaches were beautiful! 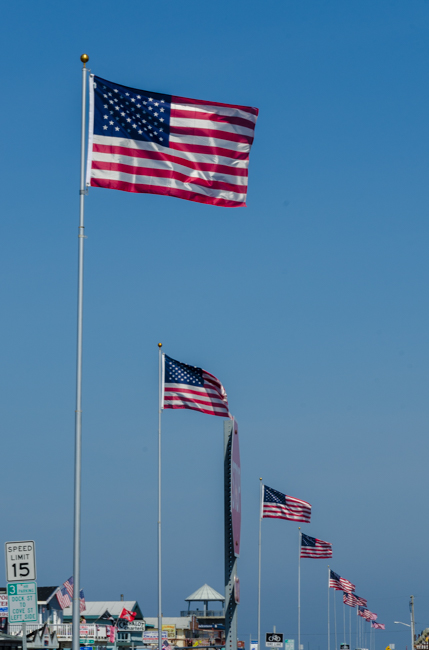 Yesterday was 4th of July and many flags were flying in the marina.

Today I visited the beaches to the south of Hoquiam. This is such a beautiful area of our country. It was quite windy and cool. It was also fun to watch many people flying kites along the beach.

The colorful kites were awesome!

I absolutely loved being a fulltime RVer and having the opportunity to visit so many new places and meet so many fun people. It is a wonderful retirement lifestyle! I saw a photo on Facebook yesterday that showed a couple wearing t-shirts with the phrase “I have a retirement plan – I plan to go camping!” I agree. I plan to go camping too.