Today was sort of strange. It started off with Ed giving a lecture through the Internet beginning at 6:00 am. The unique feature about this is that a group of the audience was in London, England and another group was in India. His colleague giving the lecture with him was in North Carolina. So, sitting at the table in our motorhome in a very tiny town, Ed used his cellular phone to create a hotspot to connect his laptop to the webinar. He used headphones with a microphone to lecture and answer questions from the people in India and London. It is amazing because this would not have been possible only a few years ago. Cellular phones and the Internet have really facilitated communications and have enabled people to travel and still be very connected. This RV life is so nice.

When Ed concluded his lecture, he called a local dentist since he got a chipped tooth in the past week. A disadvantage of traveling is that you cannot just run over to your local dentist. The dentist office said they had an opening if he could be there in 10 minutes. The dentist said he needed a crown and that it could be made TODAY. We agreed and Ed walked out of the dentist office 3.5 hours later with a brand new crown. No temporary crown was needed. The computer technology used by the office took electronic photos of his mouth and then designed a crown. The dentist office had a milling machine onsite that actually made the crown from a small block of material. He said the technology to make crowns that quickly in their office has only been on the market for 2 years. It was quite amazing to see the second episode of technologies’ improvements before noon today. We are in a tiny town in the High Sierras and were able to get a new crown without an appointment, only dropping in as a walk-in patient. Amazing. 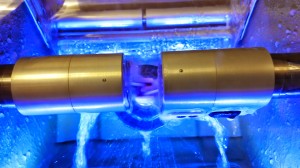 The white square in the middle is my new crown being milled in the dentist’s office. Water is spraying on it to keep it cool as it is being milled. Simply amazing technology!

We received a packet of mail from the last several weeks and discovered that for some reason our health insurance policy had been incorrectly cancelled. That is a scary realization. We together then spent over 3 hours on the phone re-signing up for a temporary and permanent medical insurance policy that will begin tomorrow. It was a hassle to go through, but we are certainly glad to know we have health insurance again.